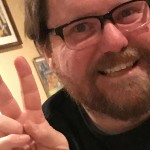 @jgreening active 4 years, 10 months ago
let me just say, that gerson and the fisherking are just full of awesomeness and loaded with superior intellect. we are so fortunate to have them on our side. View
Bard and Book Publishing powered by WordPress and The Clear Line Theme